What are Blue Russian Trade Beads?

More interest about one of my favorite subjects, Trade Beads, is always a treat for me. I’ve received quite a few questions about Trade Beads in the last few months and have determined that we really need a blog post about them on Walker Goldsmiths not just on Active Artists . So my New Years resolution is to blog about trade beads weekly!

Blue Russians are the beads that have raised the most questions lately. That is the name given to the beautiful Cobalt Blue, hand faceted, tubular glass trade beads originally traded by the Russians to the Alaska Natives in exchange for Sea Otter pelts or anything else they might want. The beads were a desirable form of currency. Kind of like the Wampum of the far north. They range in size from approximately 10mm down to 5mm in length and some are slim and some are chunky. The larger the size of the bead the greater the value.

In this picture you can see the round Czech glass beads spaced between the faceted Blue Russians. I do this to protect the antique glass. These Blue Russians are quite possibly over 300 years old, and since they are tubular shaped when the necklace bends the potential for chipping is a reality.

“We accept now that the blue trade beads probably originated in Bohemia (Czechoslovakia) and first made their appearance in Russian America in the late 1700’s. The only mystery is how the Russians obtained them. The Bohemians sent wagon trains of their glassware all over Europe including Russia. The Russian American Fur Company may have bought the beads from such a train and shipped them to the colony. There is also a story of them being stocked in the European storehouses in Canton, China and shipped to the Russian colony from there. The beads may also have been obtained from the Hudson’s Bay Co. There is evidence that they had them to trade in Canada and the Great Lakes region. John Jacob Astor, of the American Fur Co. reputedly sold beads to the Russians. Whatever the route, trade beads arrived in the Pacific Northwest in considerable quantity.”
(E. Harris)

Blue Russian Trade Beads are still very desirable and collected all over the world. In fact, they are getting very hard to find, so if you see any at an antique shop or maybe even if you’re lucky at an estate sale, snatch them up immediately! Then get a hold of Janet Walker at Walker Goldsmiths and we can enjoy them together and I can help you decide how best to use them. 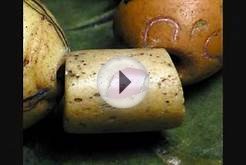 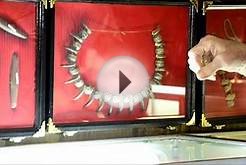